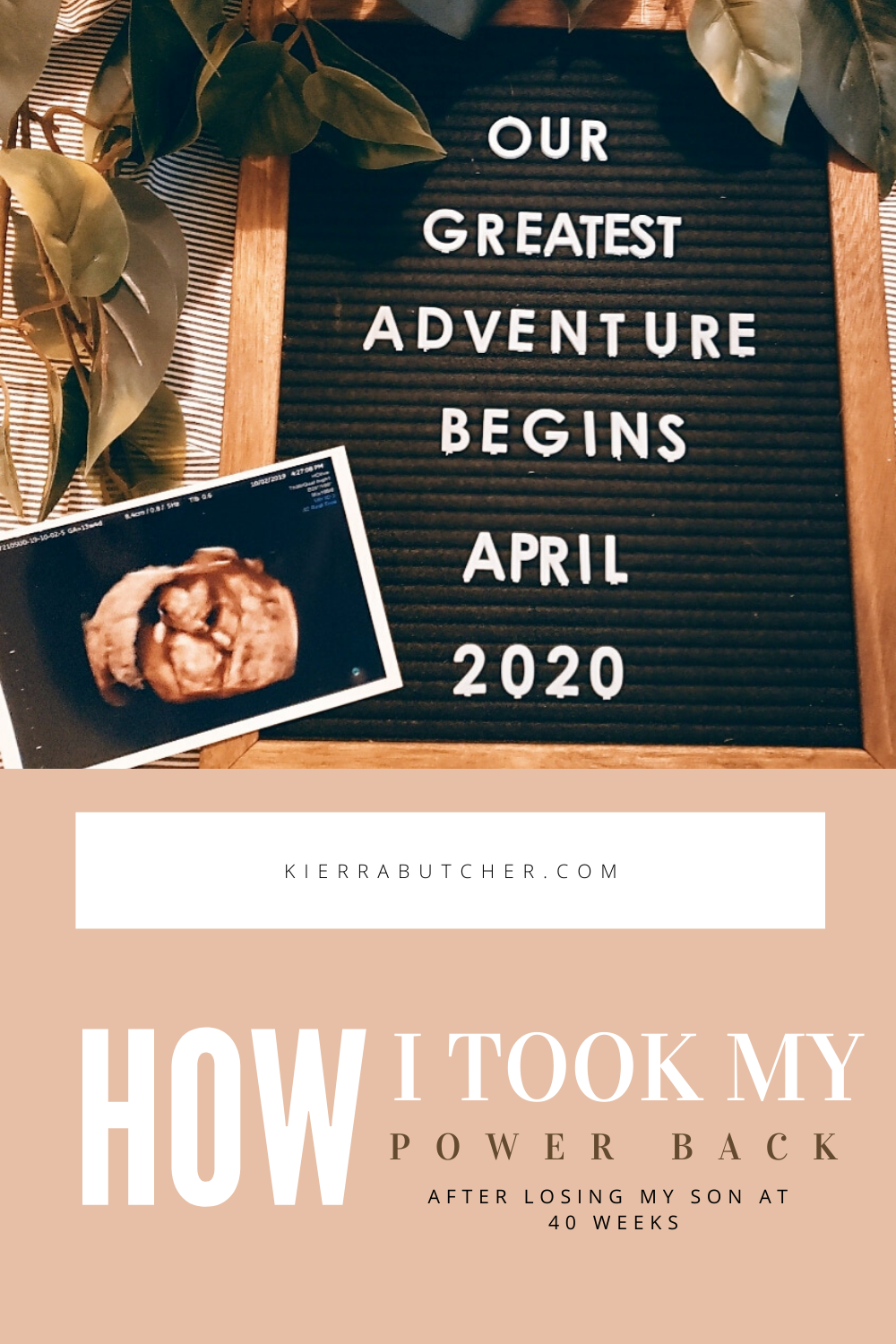 How I Took My Power Back After Loss

My husband, Matt, and I decided in June of 2019 that it was time we start trying to have a baby. We are incredibly lucky because after literally the first try it happened for us in July. 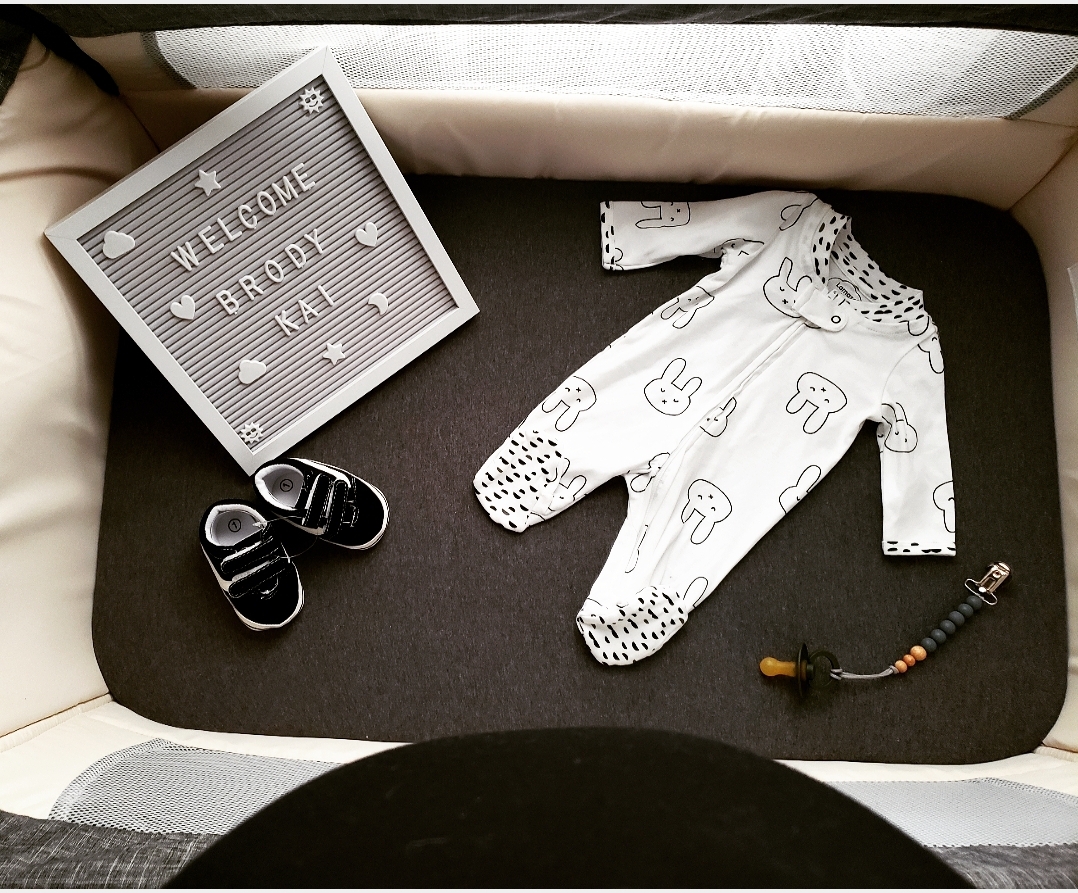 My pregnancy was easy, but I hated being pregnant. I told my husband multiple times that I would never be pregnant again. I had never wanted to be a parent in the first place.

It wasn’t until I met my husband that I realized that I did want to be a parent with him and raise a family together. My dream was to just have one son. That’s it. Just one little boy and I wouldn’t want anything else.

My dreams were confirmed when we had our gender ultrasound and our little guy was anything but modest. Each ultrasound showed these big feet like a little rabbit, so I quickly nicknamed Brody, bunny.

The rest of our pregnancy was as easy as it comes. Each check in with the midwife showed that my blood pressure was on the higher end, but they never seemed concerned so neither were we.

Our due date came and went while I grew progressively more irritated that I was still pregnant.

Of course, I tried everything humanly possible to try to coax our little bunny out of his nest, but he was stubborn like his mom. We had our 40 week check up on Tuesday April 7th and everything was still measuring perfectly, including his strong heartbeat.

On Saturday April 11th I had the typical pregnancy anxiety where I realized that I didn’t think I had felt him move in a little while. I tried the various tricks to get him to move but he wasn’t responding. I got in touch with the midwife and met her at the office where she was eventually able to get his heartbeat on the doppler. 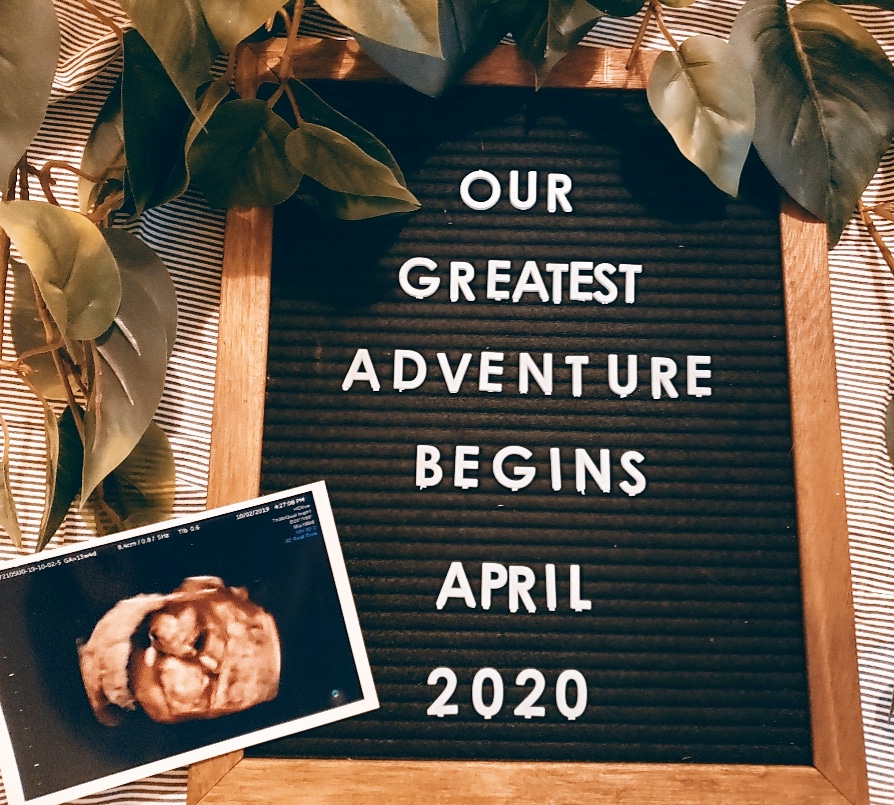 She sent us to the hospital anyways for an ultrasound since he wasn’t responding quite as well as she was comfortable with. While checking in at registration I was relieved because I finally felt him move. I was confident this was all for nothing and we would be sent home shortly.

This belief is what sent me into a state of shock when the doctor told me that our bunny didn’t have a heartbeat. The heartbeat we had heard not twenty minutes earlier was my own elevated, panic-induced heartbeat. After his ultrasound I felt movement and I asked a nurse to feel it. Apparently, for some time what I thought was him moving was actually small contractions.

To make a long story short, I was induced and after a chaotic and agonizing 30-some hours of labor our only son was born silently sleeping on April 13th, 2020 at 3:40am. When he was delivered, they attributed his death to extremely low amniotic fluid.

I’m not sure if it’s my degree in psychology or just how my own mind works, but I immediately set a list of boundaries for our grief. From the moment we were told that our baby had died, we agreed to never say or think the following ideas: Sentences beginning with “I wish I could have…”, “It’s my fault that…”, “Why us, why him…”, “If so and so would have…”, and anything similar.

These are normal grief thoughts, but they terrorize your brain.

. There has to be good that came from their being. Their life didn’t exist to bring you sadness. 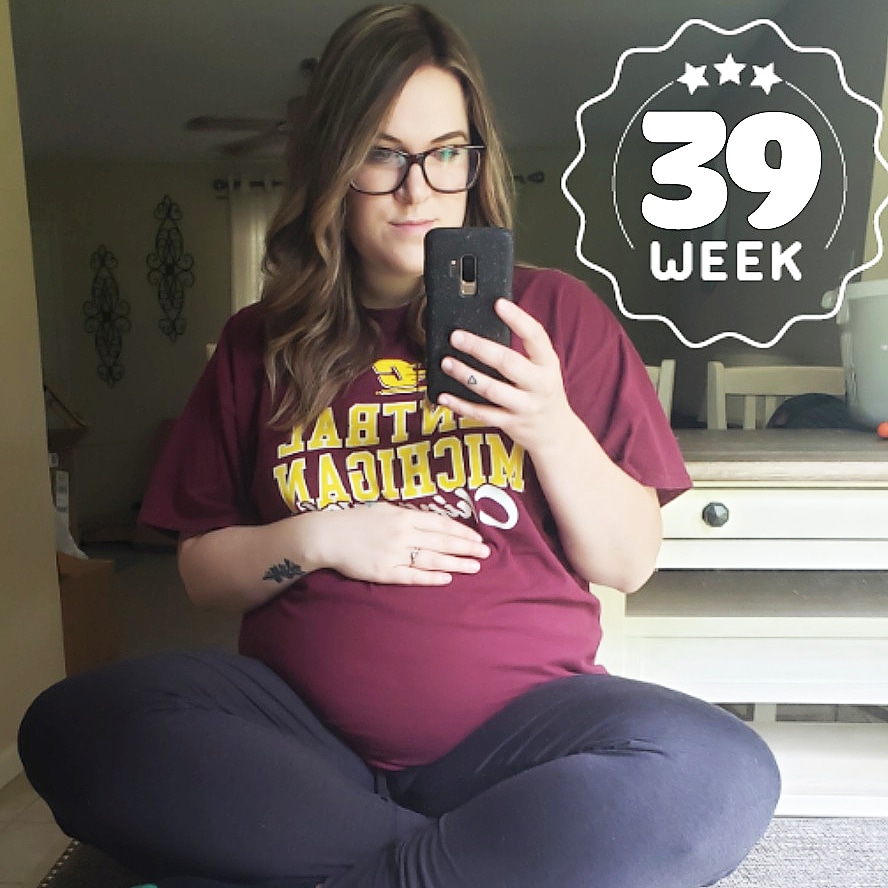 At the hospital, less than 4 hours after delivering our son, we had to choose a funeral home.

The first one I called was sent to us by the Universe. I spoke to an amazing man named Tony who told me that his wife and him lost their child the same way as us. He told me that I might have a hard time believing it now but a lot of good had come from losing their child. I’ve repeated Tony’s words to countless people.

We want Brody’s life to be meaningful and positive. His life wasn’t something that “happened to us”. This was his life to live and he was here for his perfect amount of time. I could write pages of the positive things that have come to his dad and I since he came to us. That perfectly rowdy, big-footed boy chose us to be his parents and we will live the rest of our lives thanking him for everything he did for us and continues to do. Instead of us looking after him, he guides and protects us from wherever he is. 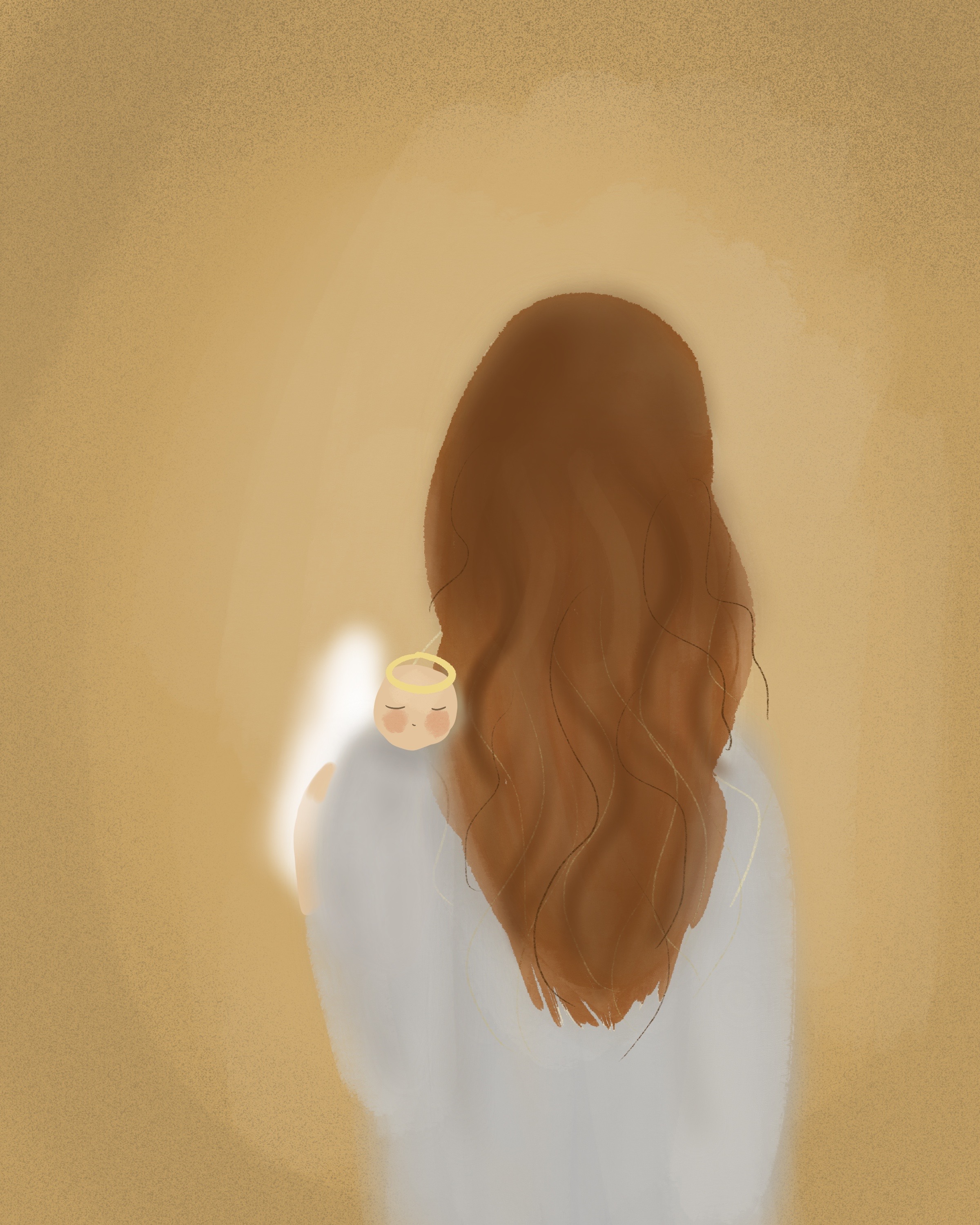 Here we are now, about 6 weeks out from his birth and (to everyone’s excited surprise) we are getting ready to start trying to give bunny a sibling.

The girl who never wanted to be pregnant will shortly be a mother of two. Deciding to try for another baby was empowering for us. We never want Brody’s life to be a negative aspect of ours.

Living in fear that his future sibling will pass as he did would be a negative association with Brody. Instead, we are choosing to take all of the things that we learned with Brody’s pregnancy and make sure that his sibling has the best chance possible.

The doctor who delivered Brody will be the one to watch our next pregnancy and he has already made a game plan to help sooth my anxiety. We wanted to be parents before Brody and he did that for us, but we are ready to be physical parents as soon as we can.

I want to leave this with something that can instantly bring me to tears but really helped me cope with our loss. Remind yourself that your body was the perfect home for your baby. They were never cold, hungry, scared or anything but loved when they were with you. Every day was perfect for them and you gave them that.

Your story might just be what someone is praying to hear right now.

Wow is all I think every time I read this. You are such a beautiful, amazing and strong woman. Brody will forever be loved by all of his family! I continue to share your story, in your words, through this post, to other women who have or are grieving the loss of their child. It doesn’t mattet how long we had them with us, they were and will always be our babies. Thank you for helping so many others by sharing your story beautiful ❤💙. Tonight, I was able to share this with another Mom, feeling the loss of her baby to soon. Of course, I re-read as well, like I do every time, because we all need reminders. It doesn’t matter how long it has been. Love you and so proud of you. Hugs and kisses to my nephew Brody, who is with so many loved ones 💙.

What a beautiful story! You are amazing parents and will be perfect parents for Brody’s sibling. My first great grandson will be forever in my heart 💙